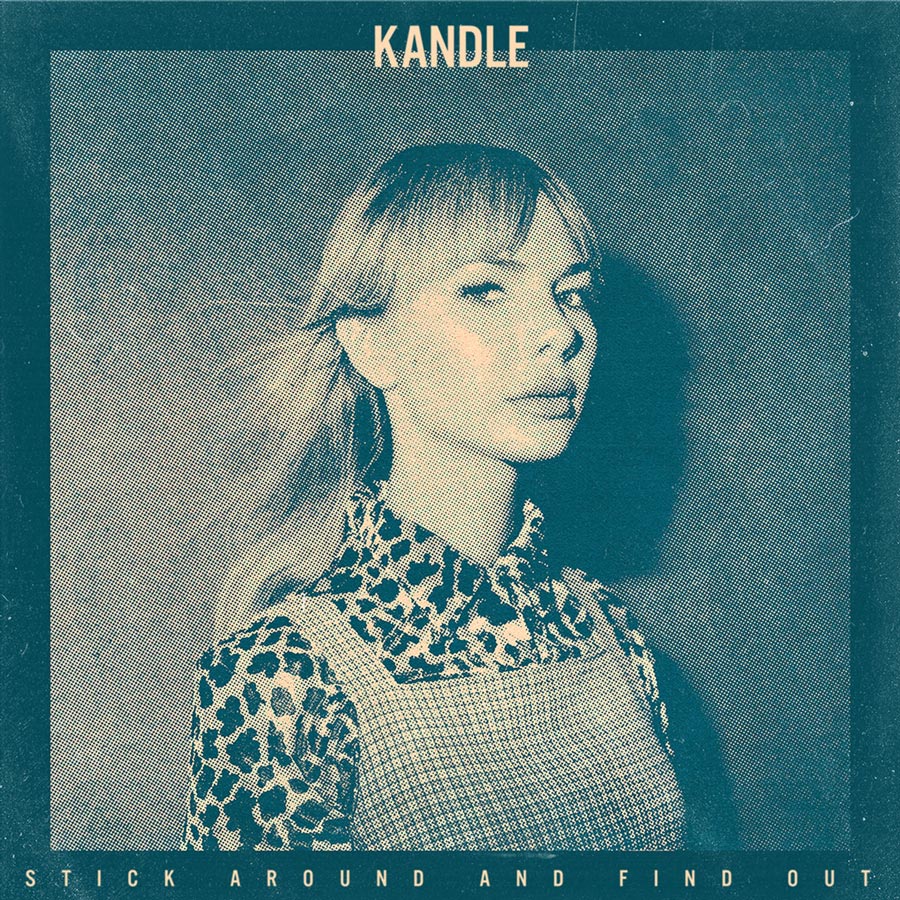 Stick Around and Find Out

The EP title, “Stick Around and Find Out” came on the heels of a year roaming around as I searched to solve all of my difficulties, figure out who I am and what I’m capable of independently and where I felt I should be. I never stayed in one place long enough to anchor myself, and I was thinking at the time that whatever “answers” I was searching for could be found somewhere other than within me. The EP is the product of my reclamation of artistic independence while adrift across the world. The songs are a chronicle of the journey I took, leading to where I’ve arrived now, Vancouver – my new home.  Each song shares a commonality – each was recorded in a different city by a different producer, with the exception of one tune, and each was written in a day. I wasn’t allowed to release anything at the time and had no money to my name but I wanted to keep going and continue to create. The EP consists of seven songs written over the span of the last two years. Stick around and find out what’s next.

Was created in London with producer Youth Martin (The Verve, Paul McCartney, Kate Bush). I toured with Youth in China when I was 18 and played in the Blue Violets who were opening for his band, ‘Killing Joke’. I’d kept in touch with Youth, so when I found myself back in London, I asked if he wanted to hang out. He invited me to his house for tea and then suggested we go upstairs to the studio and write a song. I thought, “Oh shit. I have nothing.” We talked about influences and sounds. He said I had a very cool, dark Motown, psychedelic vibe and we should roll with that. I was giddy, nervous and ready for the challenge! Michael Rendall, the engineer, was sitting at the computer ready to go and Youth said, give me a Motown beat and Michael started playing something then Youth grabbed the bass and started his fuzz driven tasty riff. He was looking at me for feedback and I gave him an eager thumbs up! We started building that instrumental arrangement and the whole time we were doing that I was panicking in my head wondering what I was going to sing. I started having little ideas and I’d run down to the bathroom and sing them into my phone as I didn’t want to let him down by choking or seem unprofessional. A couple hours later he said, “It’s time to sing” and put a mic in front of me and I recorded pretty much all of the vocals on the spot. Youth played the song to a few people who said it needed a chorus. So I came back the next week, slightly panicked again, to come up with the words. I just wanted something timeless. Something reminiscent of Aretha Franklin and something simple, as the song tells the story and has a lot of lyrics – hence spelling out S P E L L! Essentially, it’s about falling too hard for someone and giving them too much power over you. Feeling as if you have to change to please them to the point that it feels as though you’re under a spell. No matter what you do it doesn’t feel like it’s enough. “So sick of you, so sick of me, dressing up like the star of your fantasy.” Spells ain’t love.

Was written a few years ago in my bedroom at my parents’ house In Victoria on an acoustic guitar. I was very inspired by Michael Kiwanuka’s soulful track, ‘Cold Little Heart’. I started with a minor chord and some ‘ooh’s to build a choir vibe. Then I brought it over to Louise Burns in Vancouver and, over sushi and wine, tightened up the arrangement and worked on some harmonies. I was really focused on trying to make it groove and feel good. I got Dave Genn (54.40, Matt Good) to produce the track in Vancouver with me. The song evolved from the chorus, “How can you hurt me when love’s just a word I no longer believe, you’ll never try, you’ll never use it on me”. I was dating a fellow songwriter in the aftermath of a split with someone that had hurt me deeply. I thought I could be in a relationship with boundaries that didn’t allow love to be part of things, seemingly to make it safe while we kept each other at a distance. The song essentially says I don’t believe in love and you can’t tell me that you love me anyway. We were stuck on the solo section, until I told Dave that I wanted it to sound like the Doors featuring a 60s organ solo. As soon as we had it, I couldn’t stop dancing!

#3 Just To Bring You Back

Is an up-tempo, Motown inspired tune I co-wrote with another excellent British producer, Warne Livesey (Midnight Oil, Matthew Good Band, The The). I was in Toronto with nowhere to go and had been invited to stay with the Liveseys who are close friends. Warne and I were talking about him possibly producing a song and I had to tell him that with my current situation and legal troubles, I had no money and wouldn’t have any in the foreseeable future. So I told him what I’d just done with Youth, co-writing a song so we both had something to gain. We talked about the Motown inspiration, some Jack White- style guitar sounds, then we both grabbed guitars and started playing. Warne got a drum loop down which we replaced several months later with real drums when I was recording my album, added the bass and we just kept tweaking it until it sounded quite catchy and tasty. Once we had the instrumental done, I kicked him out of the room and I sat down with a mic and ProTools for 3 hours and wrote and recorded the lyrics right there. Warne did his first guitar solo ever (I’m very proud) and then mixed it too.

Started with a 6/8 beat as I definitely wanted it to sound like a Beatles arrangement. The song was written in London on an acoustic guitar in about an hour. I’ve never had a music lesson in my life and I don’t really ever know what chords I’m playing, so I had to take the time to figure out how to play the notes I was hearing in my head. I then brought it to Dave Genn. We looked at some Beatles production notes — what kind of guitar to use, what kind of tambourine, and we added a mellotron and thought each verse should add a different layer instrumentally to let it build and build. We added brushes on the snare to give it a bit of a vinyl hiss. The song is about not letting little bad things get in the way of your life. Prior to writing the song, I’d been in a very dark place while trying to re-gain my freedom and independence. I’d realized that I was waking up each morning to the very same day. I’d start off sad, unhappy and frustrated. Eventually I had an epiphany and realized that yes, bad things were happening but I was the one keeping me feeling so down and I had the power to change my perspective.

Was written in L.A. It was the first song I’d done since a breakdown I had in the midst of fighting for my career. My sadness and hurt had turned to anger and power. I had been badly mistreated but I had to let go of feeling like a victim. The song began with just me and an acoustic guitar. I was playing SXSW with Louise Burns and we decided that since we were so close, we’d hop over to Nashville to meet up with our good friend Liam O’Neil ( Kings of Leon and formerly of The Stills.) We then put together a Nashville super-band with Ben Simonetti (Zack Brown Band), Julian Dorio (Band of Skulls), Joe Pisapia (k.d. lang, Ben Folds Five) and I played them the song once on an acoustic guitar. Liam sat down on the piano and went over the chords and arrangement. They made their Nashville chart (which Louise and I couldn’t read – haha) and again, recorded it in one day.  It felt so good to speak my power in a song with really good, supportive men in the industry backing me up and helping me for nothing.

Was written with my Dad (Neil Osborne of 54.40) in our other band, ‘A Family Curse’. It’s such a great song that I started playing it live in my own act. I couldn’t help but record my own version for the EP. It’s such a classic great song that it lends itself well to other interpretations. Cemetery is about getting in your own way and realizing the power lies entirely with yourself; that holding back, hiding out and living without connection and consumed by fear is ultimately an unfulfilling endeavour. It was recorded in Montreal with my good friend Sam Woywitka (Half Moon Run, Luca Fogale, Patrick Watson) who just wanted to help me move forward by recording his favourite song of mine along with two incredible players from my Montreal based live band, Jason Kent (Sunfields Band) on guitar, piano and bass and, Carl St. Louis on the drums. We just tried to record it as we’d performed it live 100 times and we captured it perfectly.

Was my eleventh hour song, written just before I started recording my full length album to be released early in 2021. I was sitting around in the Hipposonic studio in Vancouver trying to finalize arrangements for recording when I picked up a guitar and wrote it, almost by accident, in about 10 minutes. I had been focusing so much on rockin’, Motown, power house songs that I kind of missed being a little bit folky. At the time I was working on getting off of the medications that I’d been put on post breakdown and realized I wanted to reclaim and manage my life without them. “When did I start? And how do I stop? I caught my reflection, tied my stomach in knots”. I produced the song myself in Vancouver. Then I recruited my favourite Aussie musician, Wade Crighton, whom I met while doing an artist residency on the Gold Coast of Australia, to record a background vocal track to add to the song and play “doctor”.

This Curse - From The Darkest of Places